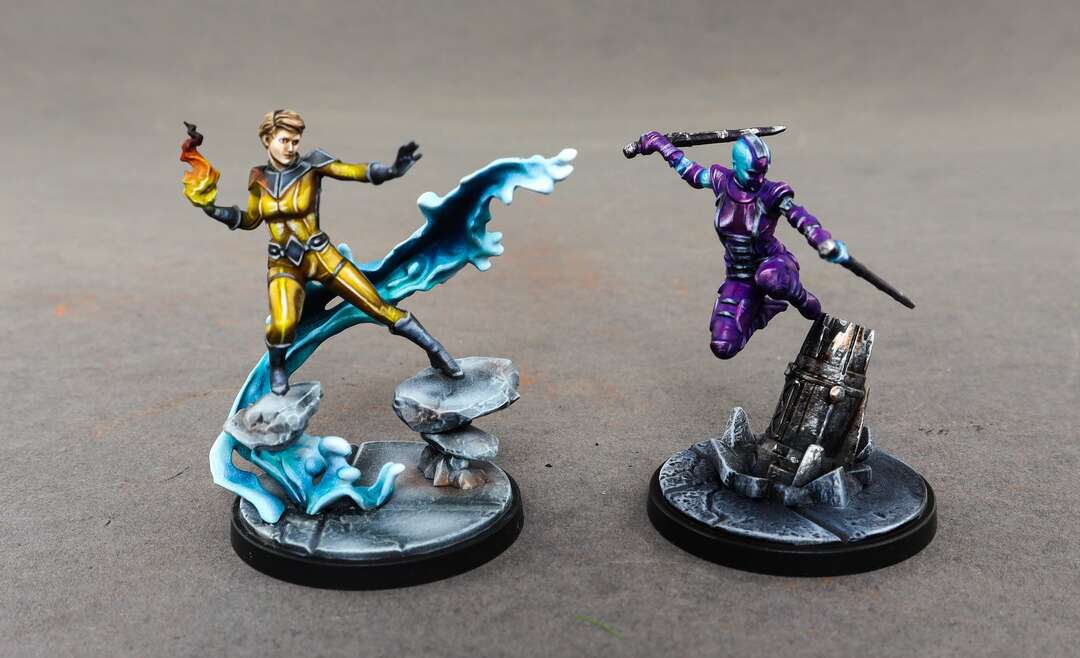 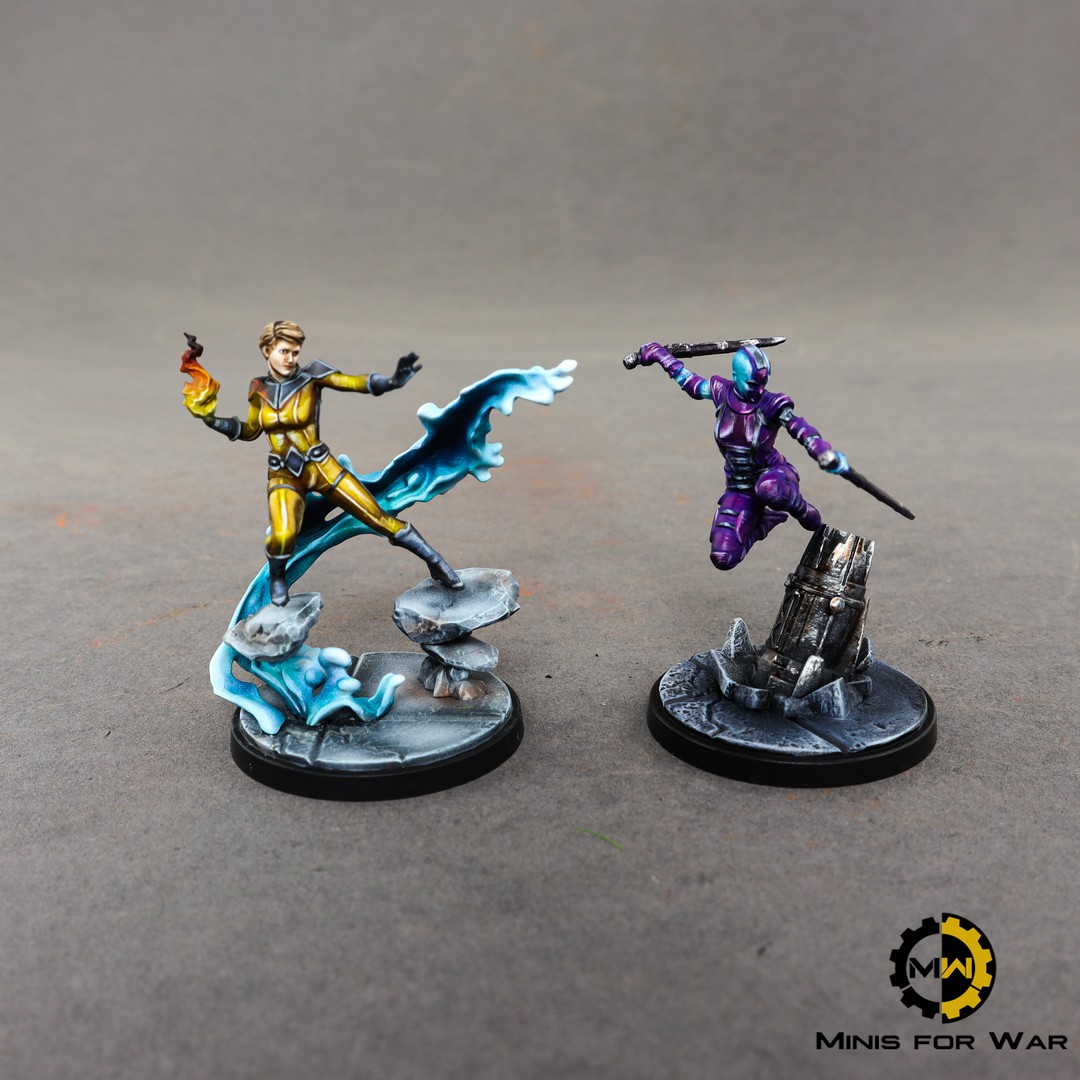 “Well, you’re not the only one who can lose his temper — now see what it means — to anger an elemental!!”

Beginning on the left we see Crystalia Amequelin, also known as Crystal. She’s a princess of Inhumans, sister of queen Medusa. She possesses the power to control elements. When she’s not fighting alongside Earth Heroes like Avengers or Fantastic Four, she takes her royal role seriously and fights for the betterment of her people.

On the right we got Nebula. She’s an adopted daughter of Thanos. She hates her sister because their father-in-law openly prefers Gamora over Nebula. Raised by the Mad Titan she doesn’t know what “family” is but she’s a decent fighter with superhuman agility due to her cyborg body. 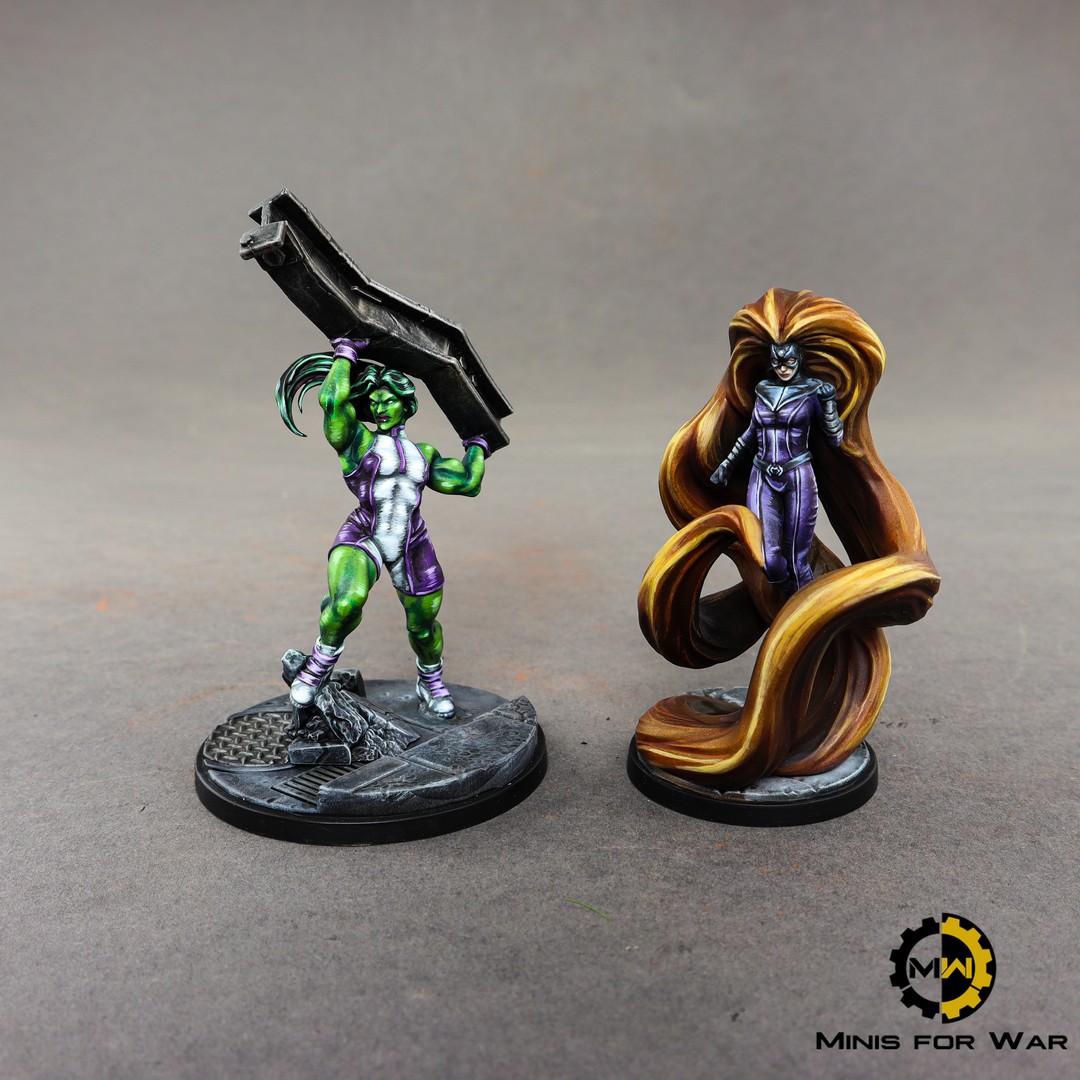 “I am an accidental queen, Karnak. I never asked for this office. Ahura will take his father’s place on the throne as soon as he is of age. I will not allow anyone to usurp his succession. So I am queen, and I will hold the throne in faith for my son. And I will stay queen until he is fit to rule.”

In this photo we can see She-Hulk and Medusa. Second one is the queen of Inhumans and older sister of Crystal. She’s also a wife of king Black Bolt and needs to interpret and communicate his wishes due to the fact that he’s not speaking, afraid of the destructive power his voice has. She is able to manipulate her hair which can lift 1,6 tons when used together.

Jennifer Walters is a cousin of Bruce Banner. One time she was deeply injured and needed a blood transfusion from Bruce. After that his mutated blood cells start to affect her and mutate her into a woman version of Hulk. She’s not that strong as her green cousin but keeps her consciousness and after short training fully controls her transformations. 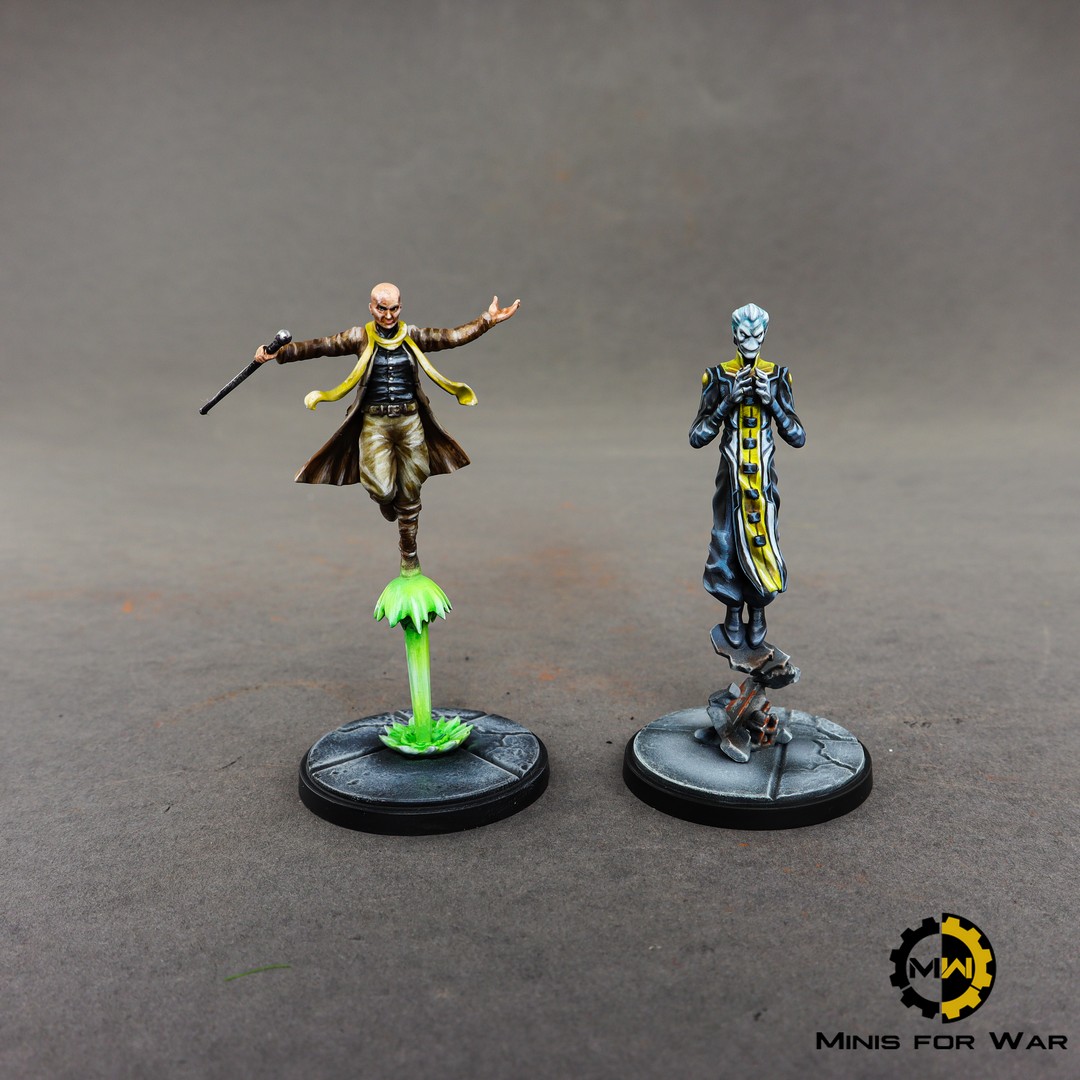 “Stop imagining poor endings for the world… a very real one is coming soon.”

Another pair of characters is Cassandra Nova and Ebony Maw. First one was described in this article (as well as Drax and Toad which will be in the next parts of this post). Ebony Maw is part of the Black Order, an elite organization of alien assassins that serves as Thanos personal army. He prefers strategy over violence and can make even the toughest minds (like Strange’s one) to fulfill his wishes due to his persuasive voice. When it comes to violence he can teleport, but also is a martial artist specialist as well as he can shoot fireballs out of his hands. 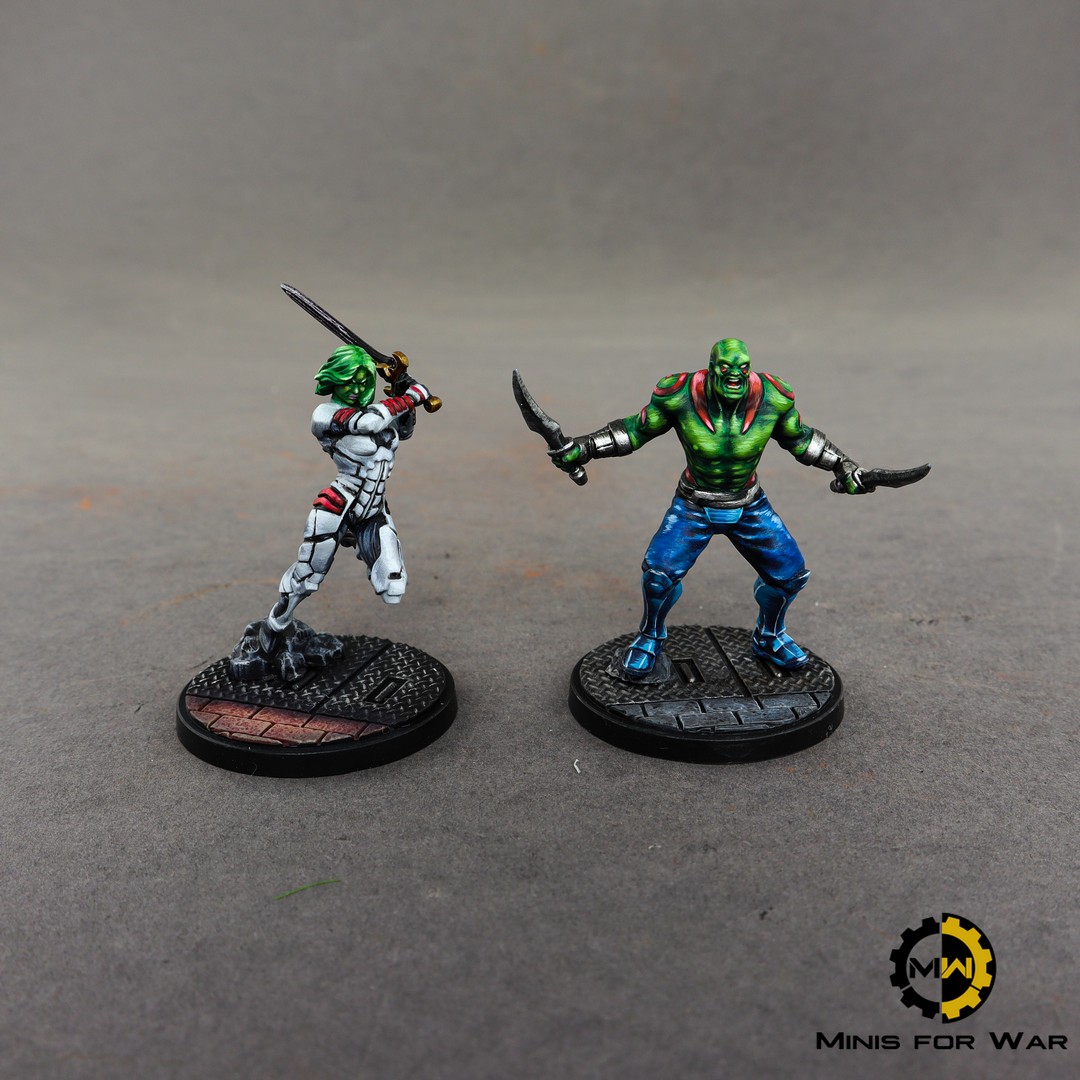 “I go by many names, my Tick-Ridden Troll, but I’m sure the one that Black Knight knew me by is Gamora, the Deadliest Woman in the whole Galaxy!”

Second daughter of Mad Titan and his favorite one. She describes herself as the Deadliest Woman in the Galaxy. She’s a master fighter, deadly assassin and part of a hero group known as the Guardians of the Galaxy. She’s the last member of her species after The Church of Universal Truth exterminates her whole race. In the picture we can also see Drax that was described in the same article as Cassandra Nova. 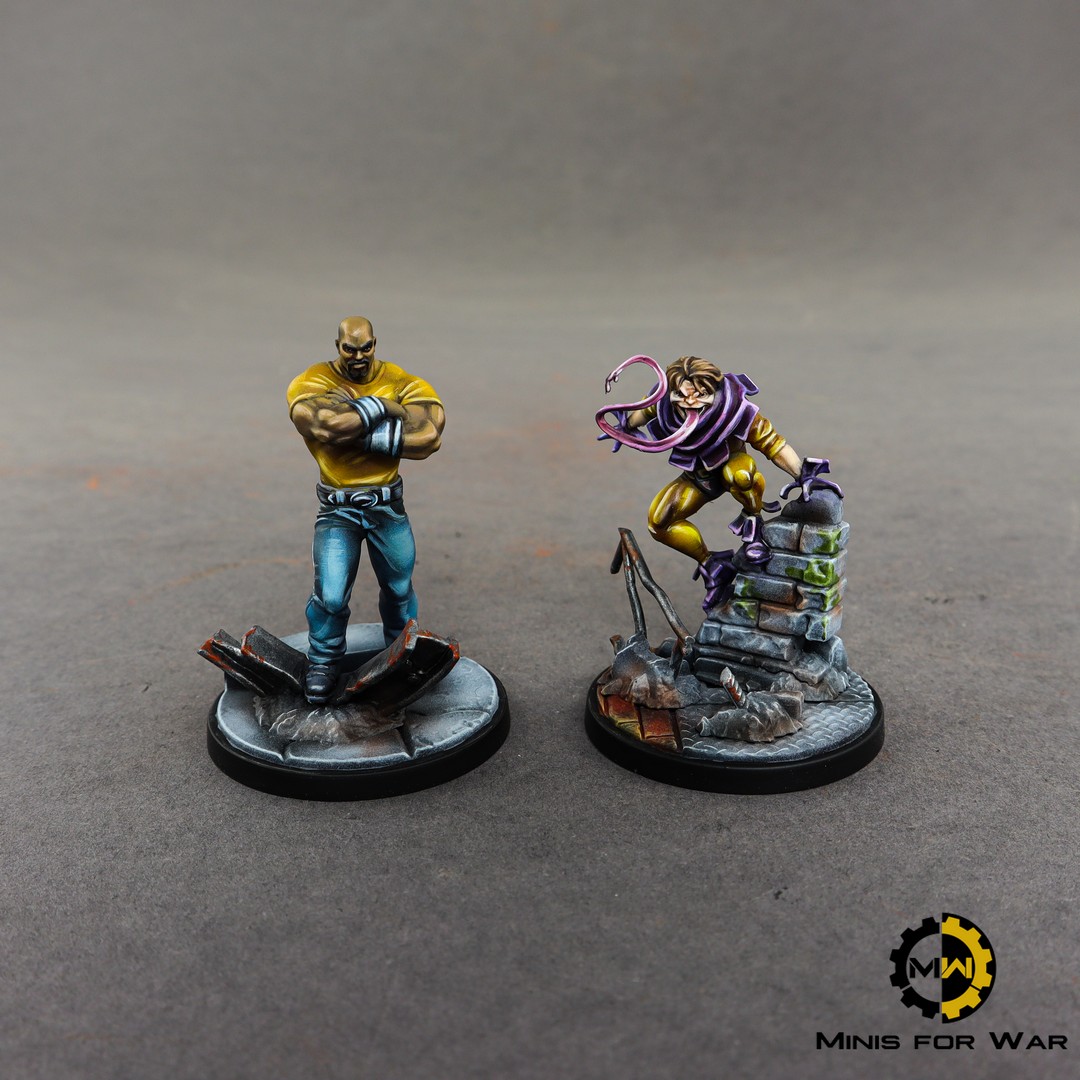 Here we go with Luke Cage and Toad (the second one was also described in Cassandra article). Luke, previously known as Carl Lucas, had a harsh youth. He was a member of a gang, committing thefts. One day he was locked in prison and from there his life dramatically changed. He was exposed to an experiment that should have killed him but rather than that it enhanced him with superhuman strength and durability. After his prison episode he became a hero, a part of the Defenders and, later on, part of Mighty Avengers.