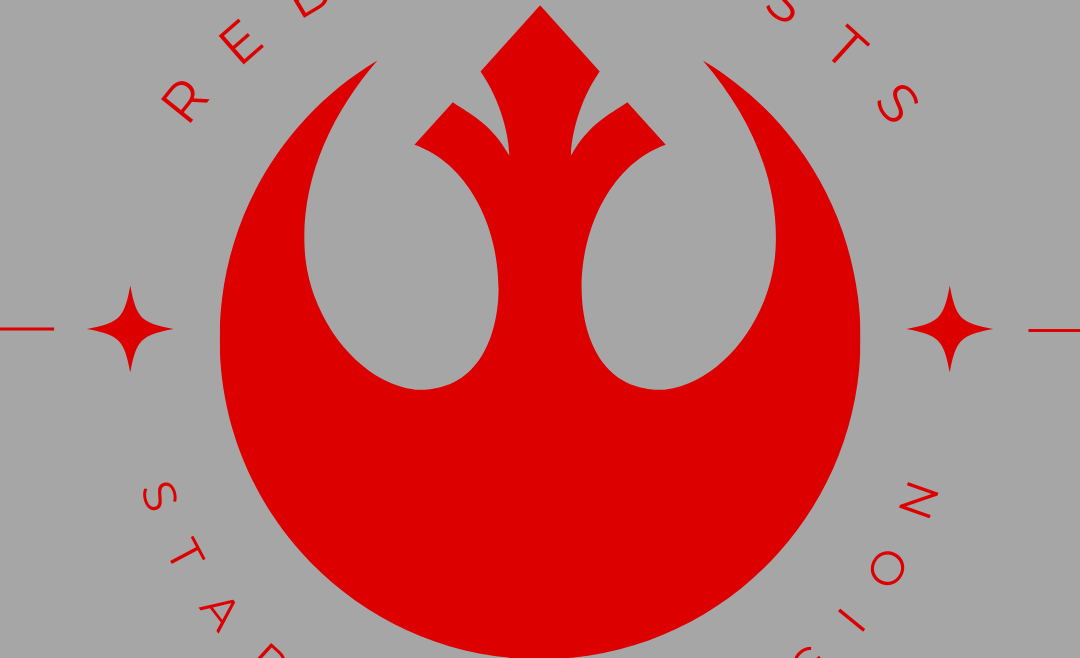 Here we go with a second article from our series that is a little follow-up and a complement of our “Start Collecting”. Today we want to spot some Rebel Alliance lists, according to our text that was published last week. In this series I will spot 3 lists per article, showcasing meta choices as well as some just-for-fun lists. Here we go! 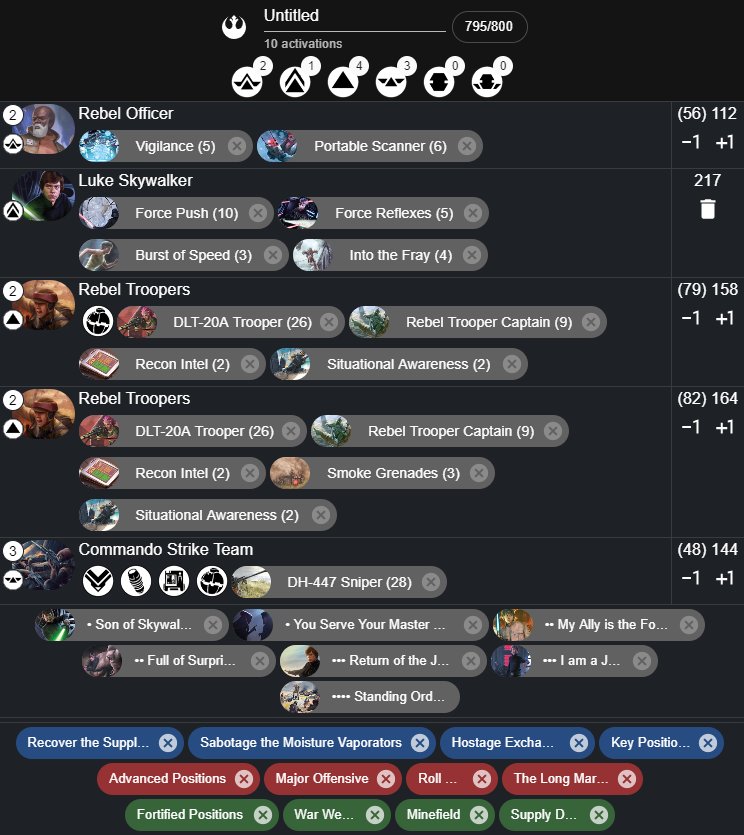 Here’s a classic meta choice (september 2022). This list gets to TOPs on Gencon World Open Qualifier. Here we can find a bunch of good choices, like DLT Captain Troopers that’re making a quite good gunline while supported by Rebel Officers. There we can also find an Area Control factor in the form of 3 Sniper Strike Teams. And the icing on the cake is Jedi Knight Luke Skywalker. He’s a beast but needs some playtesting and experience to take him to the top. After quite time taken this list will be pretty profitable. 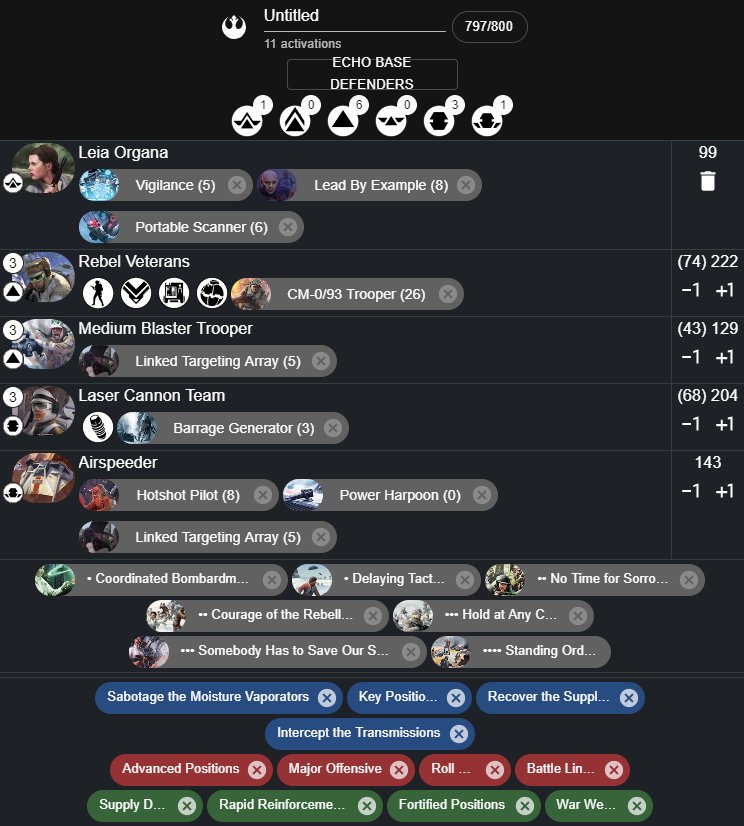 It’s a type of Leia Gunline that can play a powerful round with Battleforce Pip-3*. This list has an anti-armor option too in the form of Airspeeder. There will be easy to win scenarios due to the high amount of pretty solid activations.

*When used you issue orders to your Veterans (giving all of them a Free Dodge from their Defend keyword), then after that you issue orders to all your Medium Blaster Troopers (due to Veterans Coordinate), preparing them for their Fire Support ability and giving them aims from Linked Targeting Array. Then this Command Card gives aim to ALL your Corps units (Rebel Veterans, Medium Blaster Troopers) for a total of 6 additional aims. Then all your Emplacement Troopers (Medium Blasters again and Laser Cannons) get a standby token. That means:

All your Veterans will have aim+dodge

All your Medium Blaster Troopers will have aim+dodge+standby

All your Laser Cannons will have Standby

This led to 18 free tokens just at the start of your turn! In addition, the number of stanby’s and Fire Support possibilities change the battlefield into a chessboard for your opponent. Even the single move of his unit opens you a chance to make attacks with 39 Black Dice with Impact and/or Critical and aim rerolls. This is busted! 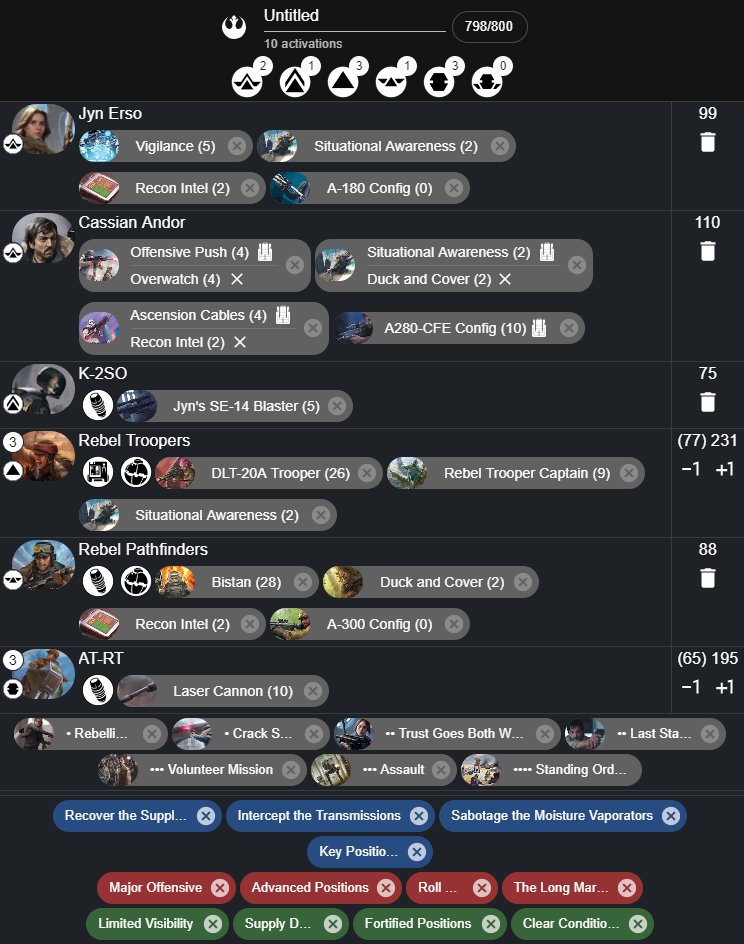 And here we go with the last but not least list. It is very flexible due to many ways to play with Jyn and Cassian (their Covert Ops ability). You can also see a large anti-armor potential in the form of Bistan and 3 AT-RT with Laser Cannons. All of that is finished with 3 Rebel Troopers DLT Captains and K2-SO. I think the list is pretty solid and can be a contender even in big tournaments.