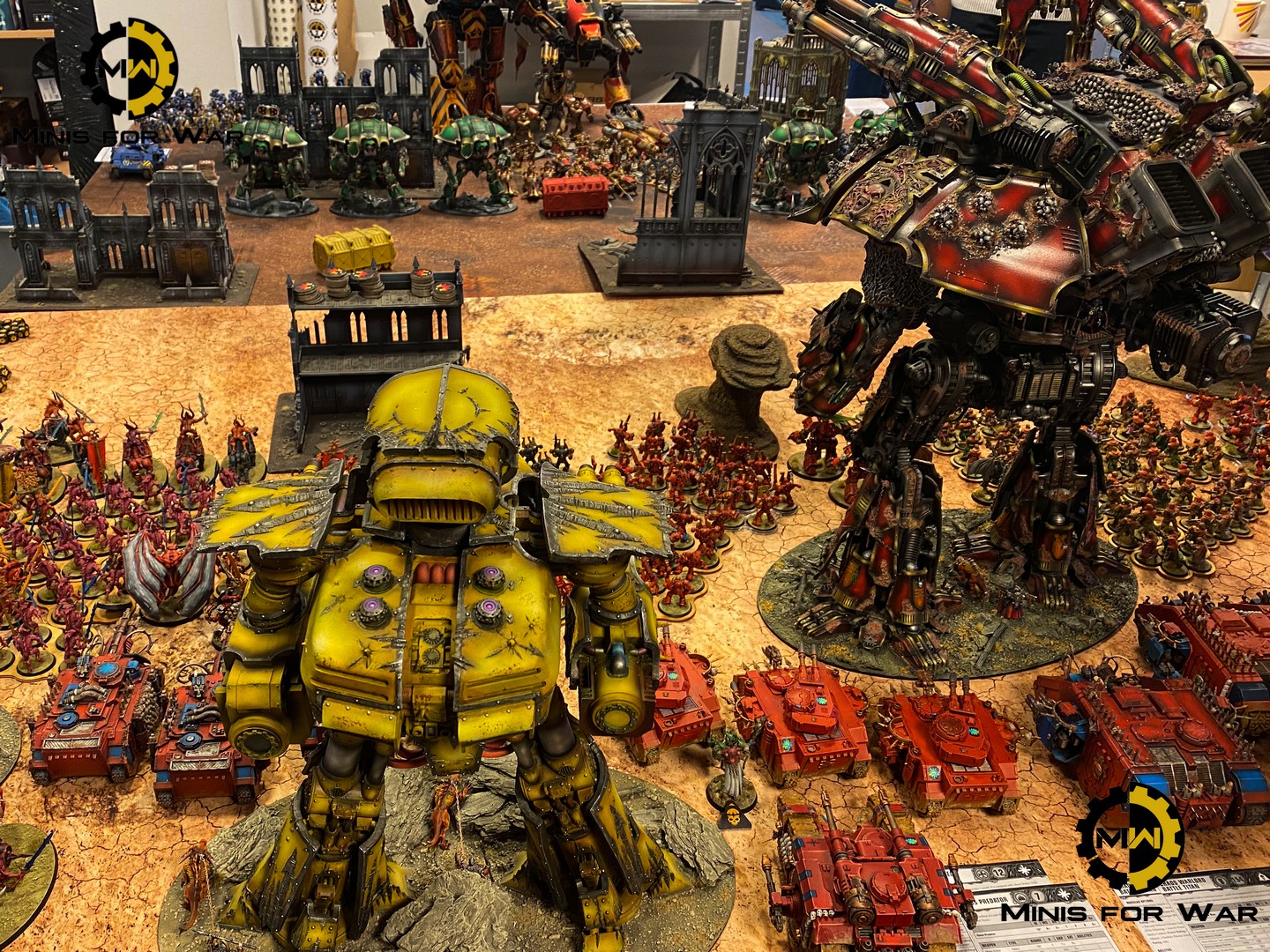 Kharn the Betrayer gathered a few Infernal God Machines, along with his own World Eaters horde and prepared an attack. The Wrap opened over the planet, allowed also the horde of Daemons of Khorne to appear in lurk for slaughter and murder. They were followed by he local Chaos Cultists worshipping Slaanesh and their master Sorcerrers, who joined the force as well.

The planet Governor’s intelligence found out, what is about to happen and alarmed the Imperial forces. Luckly, Legio Ignatum, Adeptus Custodes under Trajan command, Imperial Knights from the nearby feudal world aligned with House Krast and two companies of Ultramarines arrived just on time. Along with main forces, Sisters of Silence, who noticed the opened warp also decided to show up.

There was a 36” free zone between deployments, players decided to use a standard scenario. For most players, it was the very first game and kind of introduction to the Apocalypse game system.

Chaos forces had a value of 878 Power Levels (in Apocalypse the Power Levels are used to measure the strength of the army).

To balance a game a bit better, we added some extra points to Imperial forces (as game mechanics and scale of battle, cause Titans to be very hard to kill). They were 1007 Power Levels strong. 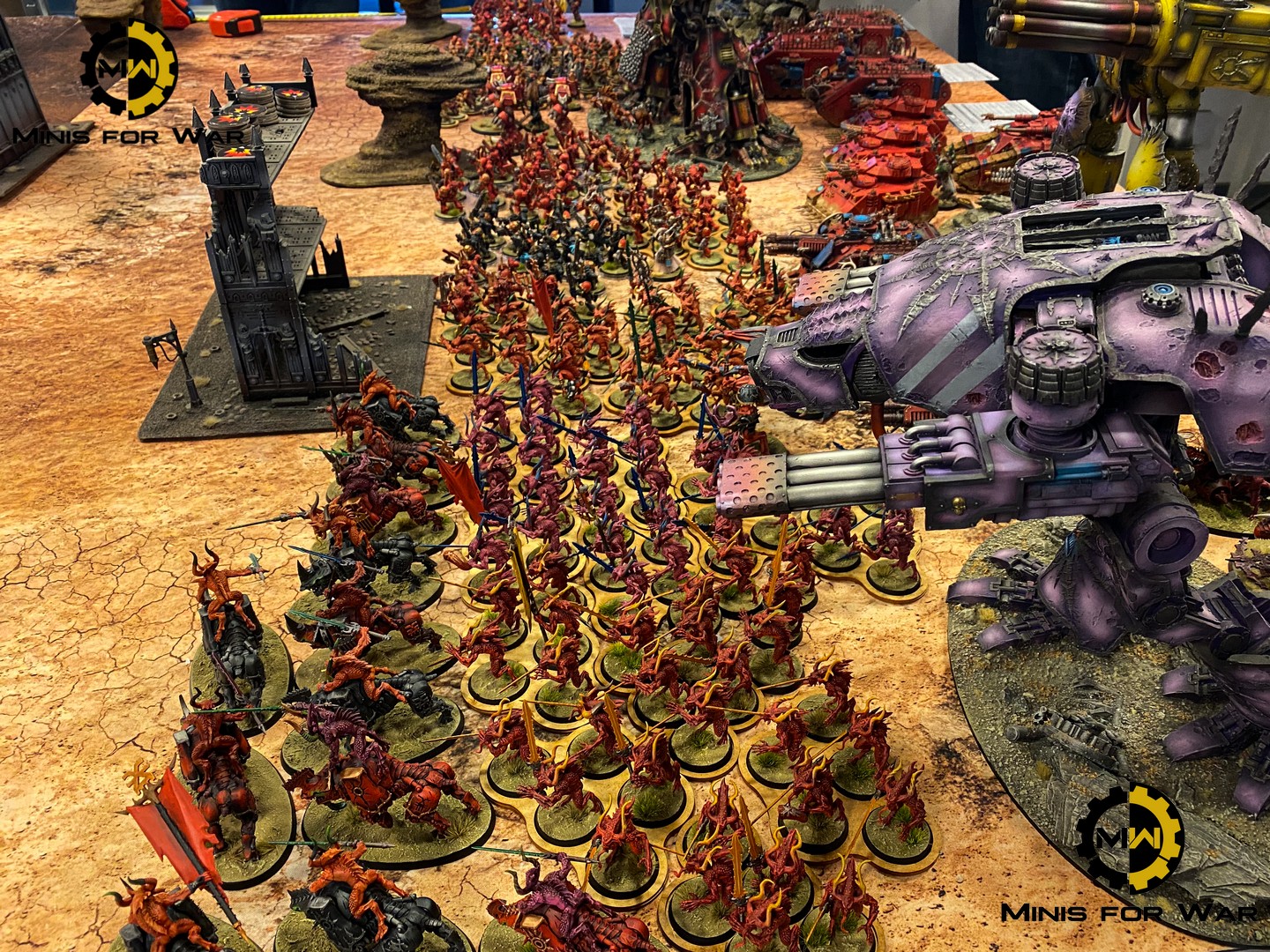 Imperium generated 12 command assets and 13th on roll of 4+. Warmaster Trait increased the limit up to 12.

Players decided to activate 3 detachments per side, during 1st activation step to speed up the game.

Chaos had an initiative (both sides rolled D12). Most of the infantry simply rushed forward with an Assault Order (2x Move). The vehicles also moved, trying to catch the range for shooting.

Unfortunately the Imperial Knights stood in place and blocked movement for the Ultramarines behind them.

The Titans unleashed their powerful weapons, trying to put as many blasts on Knights and Custodes as possible. Chaos hellforged vehicles and contemptors were a target for Imperium.

In the damage phase, the blood was spilled for the first time. 12 Bloodcrushers rushed under the heavy fire of the whole Imperial flank. Too many blasts, not a chance to survive.

Both sides used the Orbital Bombardment Command Assets and Laserburn line. As a result the Chaos Lord, commanding Predators and Hellforged Sicara as well as Tigurius  were there no more. 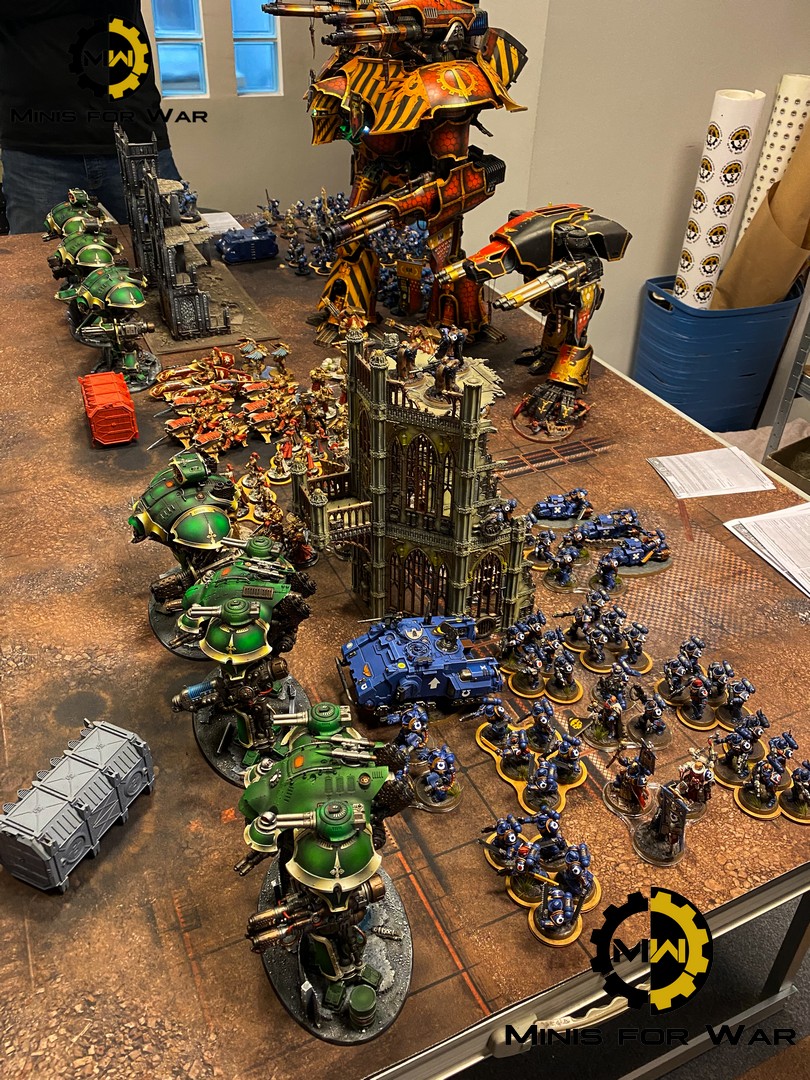 Chaos rolled for the initiative again. Having some tricks at hand, he used it very well. Sorcerrer used a psychic Command Asset card Warp Time, in order to give a free move action for few units. 2 units of 30 Cultists and 20 Berzerkers moved 6”. 3 detachments were activated, allowing Cultists and Berzerkers to rush another 12” and get in base contact with Imperium forces, giving them a better chance to survive.

Another exchange of fire, Vertus Praetors and Agamatus Custodians were moved to the centre of the table preparing for an assault in the next turn. Titans have not targeted themselves again.

Another 30 Bloodletters were wiped out. Khorne Berzerkers slaughtered 10 Assault Intercessors. One Knight was also lost. Cultists in close combat were no match for Custodes. They

fulfilled their task, holding an advance and blocking the flank in narrow place, very well though. 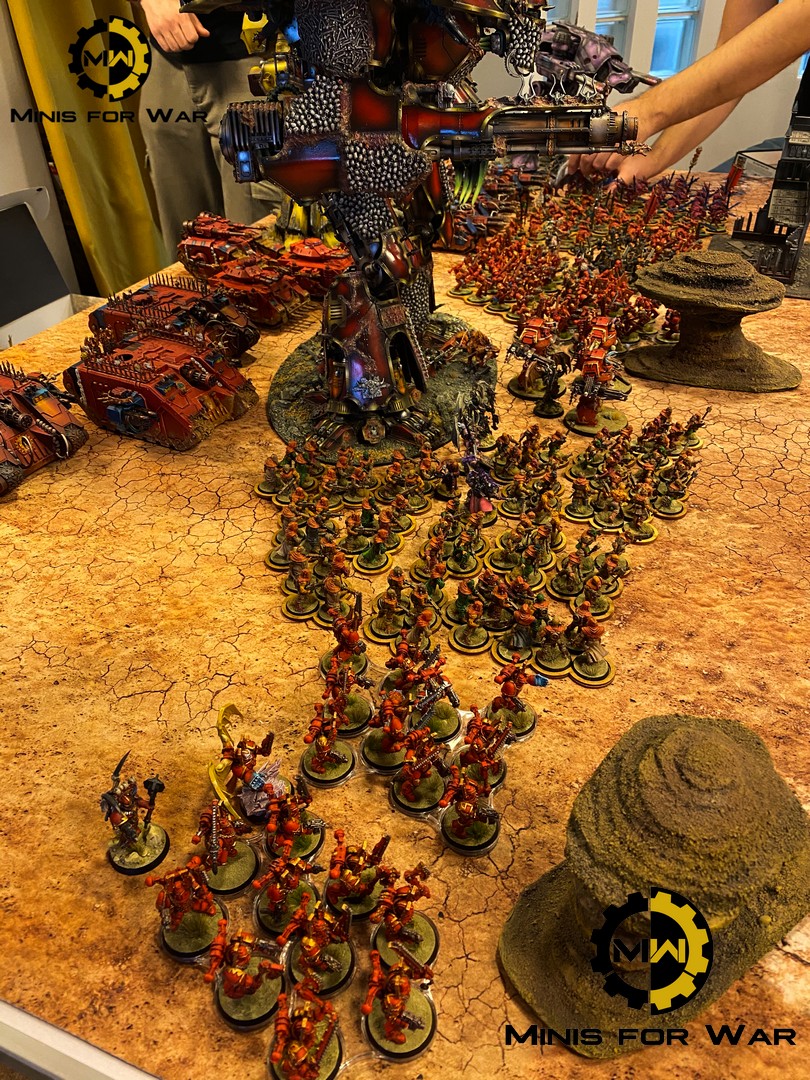 Chaos was trying to rush Assault Orders on Infrantry against Custodes again, but the Imperium used Command Asset to change the Daemons Battalion order to any other. Sneaky loyalists. At

As the Chaos moved forward, there was some space behind the lines, to drop a deep strike. Vanguard Ultramarines Detachment appeared. Chaos have had to split the fire. Reaver Titan used his Gatling and Incinerator missiles against them, all the way till they met in a close combat.  Chaos Warhound Titan with two Inferno Guns came to the centre of the table on the flank. He hid behind ruin and unleashed 18” flamers with autohits against Custodes Vertus Praetors. As a response, the Imperium was to kill this Infernal God Machine by any cost. 3 detachments of Ultramarines infantry, Imperial Knights and both Legio Ignatum titans unleashed their fury against the Warhound. He lost 10 wounds from shooting damage and 1 damage from a failed morale test. The Warhound had a very last wound left… his end was near.

The Chaos revenge was sweet. Well hidden between his golden guards – the Warmaster Trajan became a target for Chaos Predators and Hellforged Sicaran. Although the Lascannons damage the personnel type at 10+ (D12 roll) Trajan received a good amount of blasts. Unfortunately Imperium players had not decided to use Command Asset to double the save roll. Trajan failed twice. He also failed a morale test and received a 3rd wound that was mortal.

Custodes were in fight with Cultists. Chaos Landraiders Achilleses and all Contemptors were gone. Eliminators played their role very well and sniped out the Chaos characters. Couple of them were dead by the end of Turn 3.

The Dark Apostle was required to pass his 7LD in 10” aura, allowing Cultists and Berzerkers to pass their moral tests easier. He luckily survived, as Command Asset was used to remove a blast from him, D6 roll 5+ was successful. Chaos protects! 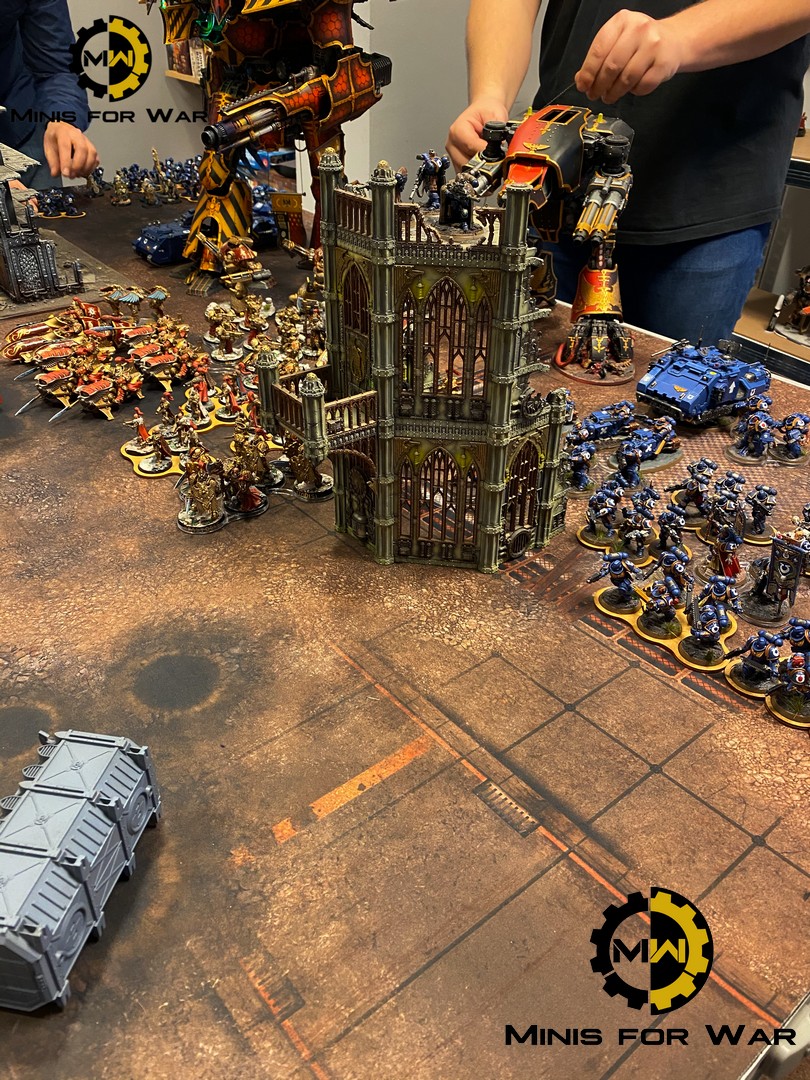 Banelord Titan rushed forward to the centre of the table with Assault Order 36”. Unfortunately the Legio Ignatum was blocked by the wave of infantry and could not come any closer.

Ultramarines and last Knights on the flank, with their Inferno Guns damaged again the Warhound heavily. However, that move gave some time for Bloodletters and Berzerkers to get closer.

Imperium used the Trophy Kill Command Asset against Banelord (everything that targeted this model was allowed to re-roll the hit) Knights, Titans, Custodes and whatever wasn’t in a base contact with Chaos, fired at him. Warlord, having 36 wounds and 4+ save is a very tough guy. He received 27 large blasts, save rolls were just in line with statistics – he received 13 damage points.

It was a struggle was to keep Berzerkers and Cultists alive. Berzerkers were heavily damaged and about to be wiped out. Chaos decided healed them with D3 at the beginning of the turn. Sorcerrer used psychic power to double the save results. That way Berzerkers kept stacking Ultramarines in a close combat.

This turn Chaos lost many Characters including the Dark Apostle. 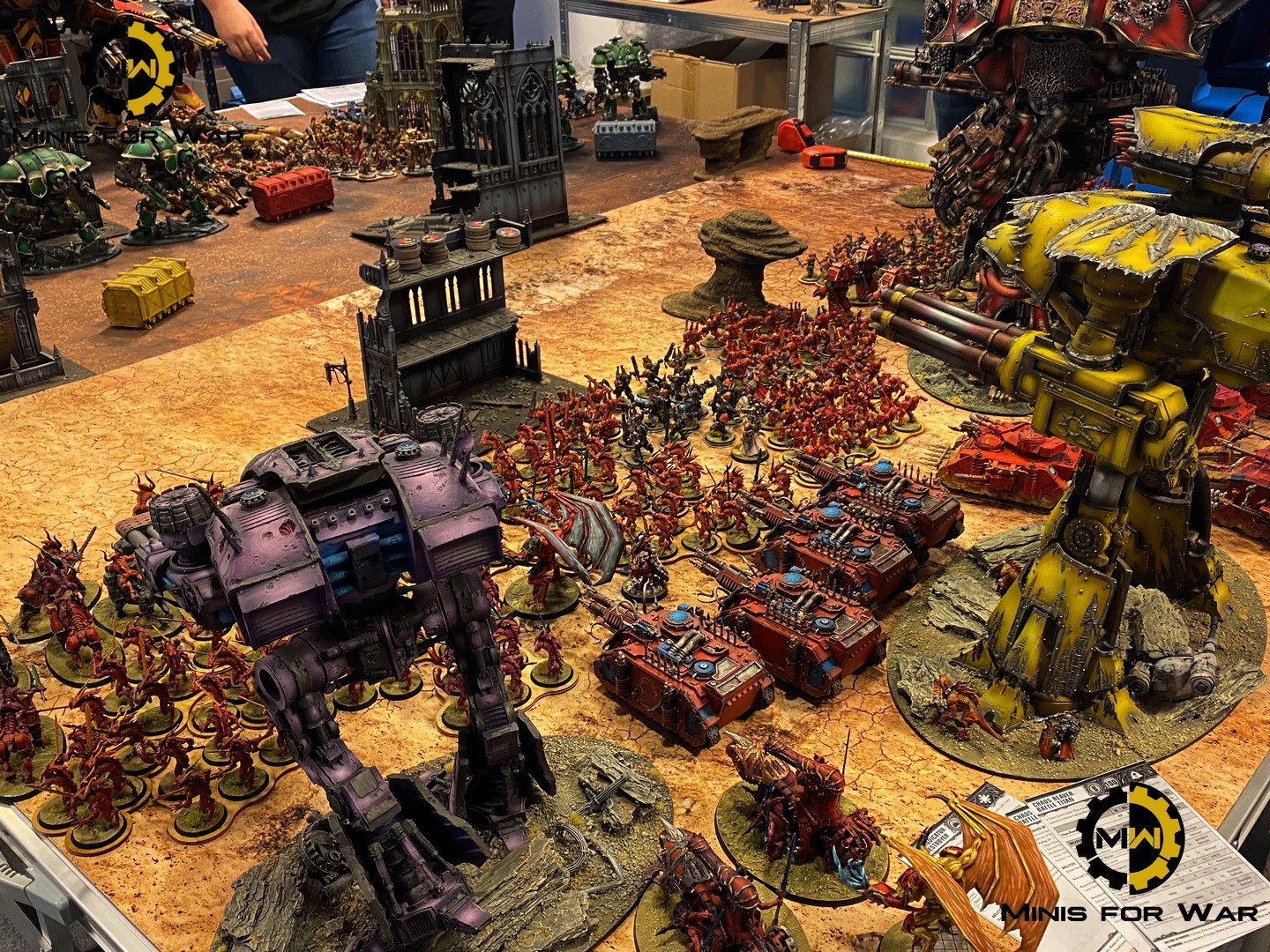 Chaos picked only 6 Command Assets, as other Characters in detachments were killed and a number of Character Commanders dropped.

Chaos Daemons finally assaulted Ultramarines. Khornate Daemons, with their Command Asset were able to clear out the Ultramarines Characters.

Eliminators were trying to shoot the Banelord Princeps – but even that failed.

Unfortunately Chaos made a wrong decision and fell back with Cultists from Close Combat. Ultramarines units, that were previously stuck, now were allowed to shoot at Cultists and destroying them ultimately.

The game was great. Players decided that it was a draw with slight Chaos advantage. It does not matter that much as, long as they all had lot of fun.

Chaos has not wiped out Imperial forces. The defenders stood their ground. Kharn decided to retreat and prepare another attack in this poorly defended sector. 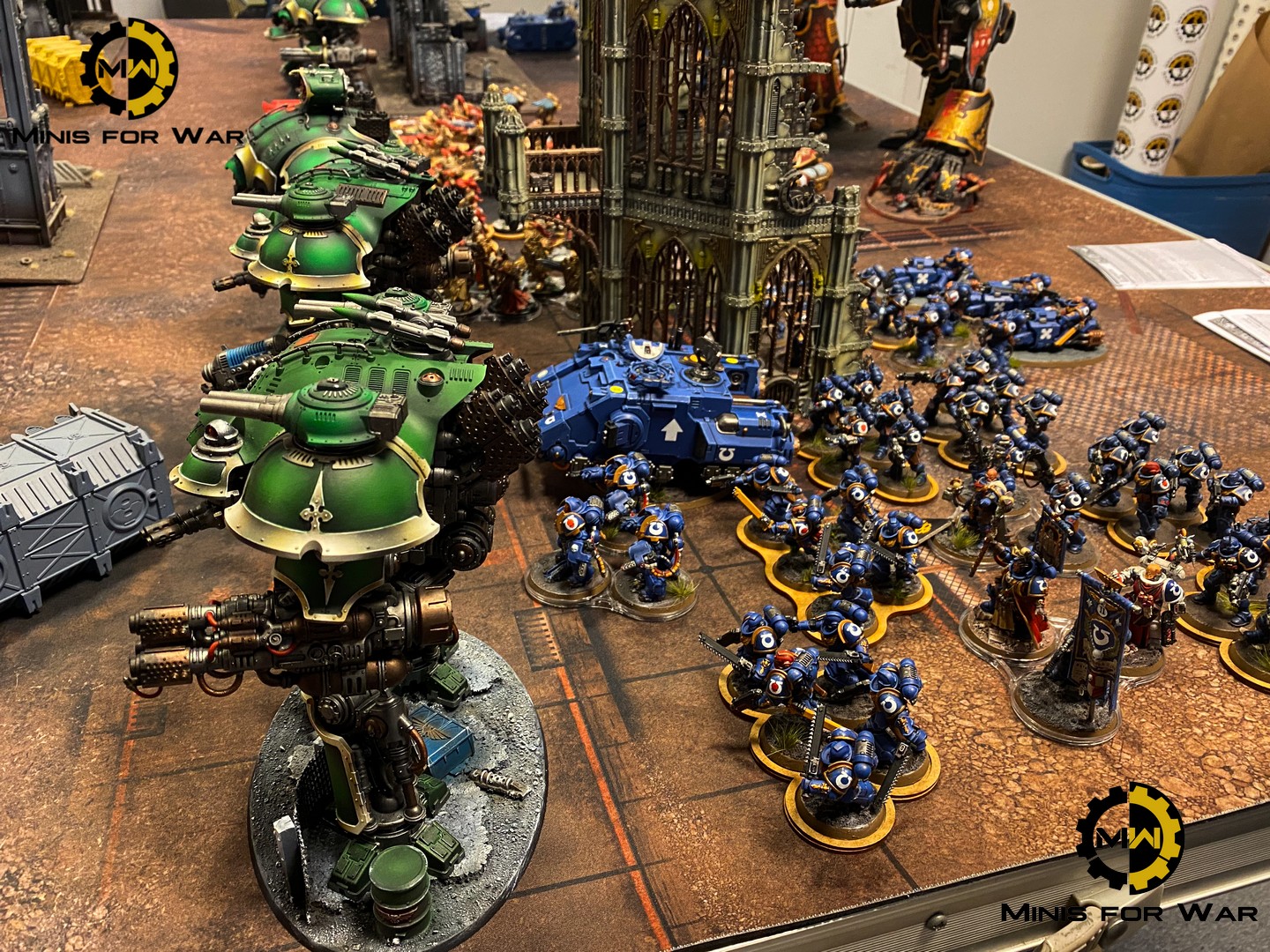 – build your detachments per their role and orders they would be getting, for example don’t put Berzerkers in Spearhead with shooty units like Havocs, as the Berzerkers won’t benefit from Aimed Fire order.

– players activate their detachment one at a time, this way players can be focused on the game, good interaction

– damage is applied at the end of every turn only, all units have a chance to do something and carry their orders

– get prepared for both personnel and heavy weapons, Lascannon or Melta damages Light units at 10+, but heavy on 5+/4+, don’t arm yourself with plenty of such weapons if your opponent plays infantry hordes

– player (team) prepare a 30 Command Assets set to be used during the game. Here are great opportunities, tricks and pivotal points for the game.

– In Apocalypse you may use models that normally wont fit into your regular 40K games. Ever played with 24 Zoanthropes or 12 Imperial Guard Basilisks or 5x 6 Space Marines bikers or 5x 10 Terminators? Now you can and it works!

At this point I would like to thank a lot our friend Michał, for his time and effort creating content for this article! Really appreciate it Mate 🙂